The deadly Ebola Hemorrhagic Fever has been on the world news following It's outbreak in Guinea, Liberia and Sierra Leone. This has made local and international organizations putting efforts in educating the general public of possible preventions.

Due to the deadly nature of the disease some local and untested preventive measures Which I personally find funny and fallacious is fast circulating in the social media in Nigeria.  Last week the trending news in my Facebook and twitter handle was bitter kola as if that is not enough i received broadcast massage from almost all my contacts in whatsapp and bbm of how chewing of bitter Kola will help curtain the spread of Ebola.

Just around 5a.m today when I was still enjoying my sleep, a friend called and told me to bath with hot water with some quantity of salt inside before 7a.m to prevent me from catching the Ebola virus injected in the air. 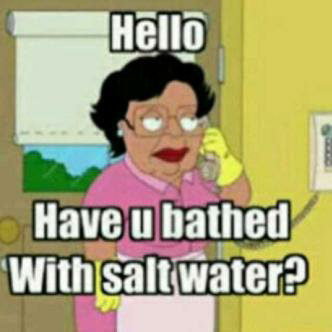 My efforts in trying to explain that Ebola is not an airborne disease and It's just a rumor was to No avail because he was not listening and wanted to reach more friends and family, so he  hang up. As I was still thinking of How  my friend is vehemently spreading this false information my phone rang with another friend telling me exactly the Same Ebola hot water saltish story again. In fact, the Same massage has been sent to me via bbm and whatsapp telling me to rebroadcast and save lives.
It is as a result of the above rumor spreading like wild fire that i bring to you how Ebola is contracted, signs and symptoms of the virus, effective prevention, and finally, treatment.

How is the virus contracted?
The disease can be contracted if a person come into contact with a contaminated object, the blood or body fluids of an animal or person infected, or even by butchering an animal infected with the virus.
Many of those who suffer from Ebola contracted it when caring for or burying a person who has had the disease, or touching contaminated needles or surfaces.
According to CNN, a deceased person with Ebola can still transmit the virus. Fruit bats are suspected to be a natural host of the Ebola virus.

Signs and Symptoms of Ebola
According to the World Health Organization, symptoms of the Ebola virus show up 2 to 21 days after someone is infected. As the virus spreads through the body's cells, it damages the immune system and organs. Ultimately, Ebola causes levels of blood-clotting cells, called platelets, to fall, which can lead to severe bleeding out of the victim's nose and mouth.
Early symptoms include: fever, headache, muscle aches, sore throat, weakness, and diarrhea. Later
symptoms include bleeding, rash, and trouble breathing. People are infectious as long as their blood and secretions contain the virus.

Effective Prevention
According to the Center for Disease Control , there are several ways to prevent contracting the virus.
1. Avoid areas of known outbreaks.
2. People should wash their hands frequently using soap and water, or use alcohol-based hand rubs containing at least 60 percent alcohol. Healthcare workers should wear protective clothing such as gloves, masks, gowns, and eye shields.
3. Avoid eating or touching bush meat or any wild animals.
4. Avoid contact with infected people. In particular, caregivers should avoid contact with the person's body fluids and tissues, including blood, semen, vaginal secretions and saliva.
5. Don't handle the still-contagious remains of those have died of Ebola. Specially organized and trained teams should bury the remains, using appropriate safety equipment.

Treatment
Timely treatment is crucial; however, early signs of Ebola are often hard to catch, as symptoms such as headache and fever are non specific to Ebola viruses Because there is no known cure for Ebola, standard treatment for the disease is still limited to supportive therapy. Such treatment includes balancing the patient's fluids and electrolytes, maintaining their oxygen status and blood pressure, and treating them for any complicating infections.
While there are currently no treatments or vaccines against Ebola available for clinical use, there are some being tested.
Posted by Unknown at 00:59

Email ThisBlogThis!Share to TwitterShare to FacebookShare to Pinterest
Labels: truth and fact